You love thinking about concepts and theories, and value knowledge and competence above all else. You apply very high standards to all that you do, and you best understand things by analyzing underlying principles and structures. You enjoy working independently. Most of the time you are caught up in your deep thought life, and as a result, others may perceive you as disconnected. You are a well spring of creative ideas, and you are probably most energized when you are acquiring knowledge and learning to master new skills. You have an extremely high level of concentration, and are good at using your future oriented thinking to see the implications and benefits of implementing your ideas.

If you're the kind of person who likes to make pro and con lists as a way of making decisions, you'll like using this decisional balance worksheet.

The decisional balance, originally conceptualized by Janis and Mann, is like a pro and con list, only much more thorough. It's helpful in providing career decision guidance, because it causes you to systematically consider all sides of a decision. When you work through a decisional balance, you'll think through the benefits and costs of pursuing a specific choice, and you'll also think through the benefits and costs of not pursuing specific choice.

It's very easy to use a decisional balance. Just follow these simple steps:

Above the grid, write down the choice or decision you are trying to make.

In the box at the top left corner, write down all of the benefits of choosing the option you are considering.

Example: Write down all of the ways you'd benefit from accepting the new job

In the top right corner, write down all of the costs, or negatives connected with choosing the option.

Example: Write down all of the negatives associated with accepting the new job.

In the box at the bottom left, write down all of the benefits of not choosing the option in question

Example: Write down all of the benefits of not accepting the new job.

In the box at the bottom right, write down all of the costs, or negatives connected with not choosing the option

Example: Write down all of the negative connected with not accepting the new job.

Putting all of those benefits and costs in writing on a decisional balance acts as a career decision test to help you think through a choice from all angles. Having all of that information organized on paper can be a huge help when you're trying to make career decisions.A decisional balance chart can also be very helpful to keep you motivated through the challenges of accomplishing whatever goal or course of action you've chosen. If you're working towards accomplishing a challenging goal, keep your decisional balance chart on hand even after you've made the decision. When you feel tempted to abandon your choice, take a look at your decisional balance. It will remind of all of the benefits of continuing to pursue the option you chose and all of the costs of abandoning your choice. 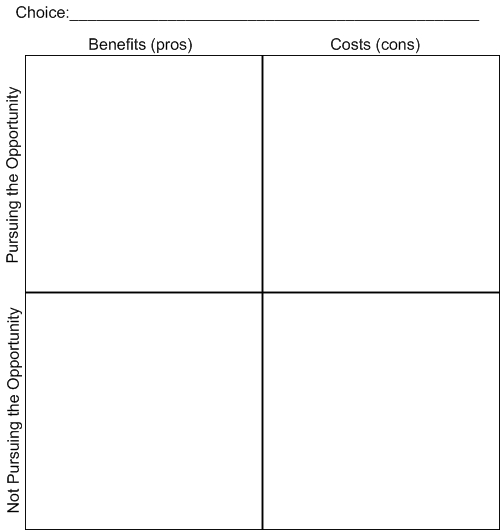 In my article on the Ten Most Hated Jobs, there were some surprises. There are also some surprises in the ten happiest jobs, as reported a General Social Survey by the National Organization for Research at the University of Chicago. (I am indebted to Lew Perelman for drawing my attention to the Christian Science Monitor article.)

1.  Clergy:  The least worldly are reported to be the happiest of all

2. Firefighters: Eighty percent of firefighters are “very satisfied” with their jobs, which involve helping people.

3. Physical therapists: Social interaction and helping people apparently make this job one of the happiest.

4. Authors: For most authors, the pay is ridiculously low or non-existent, but the autonomy of writing down the contents of your own mind apparently leads to happiness.

6. Teachers: Teachers in general report being happy with their jobs, despite the current issues with education funding and classroom conditions. The profession continues to attract young idealists, although fifty percent of new teachers are gone within five years.

7. Artists: Sculptors and painters report high job satisfaction, despite the great difficulty in making a living from it.

8. Psychologists: Psychologists may or may not be able to solve other people’s problems, but it seems that they have managed to solve their own.

It’s interesting to compare these jobs with the list of the ten most hated jobs, which were generally much better paying and have higher social status. What’s striking about the list is that these relatively high level people are imprisoned in hierarchical bureaucracies. They see little point in what they are doing. The organizations they work for don’t know where they are going, and as a result, neither do these people.

2. Director of Sales and Marketing

The meaningfulness of livesWhy were these jobs with better pay and higher social status less likely to produce happiness? Todd May writing in the New York Times argues that “A meaningful life must, in some sense then, feel worthwhile.  The person living the life must be engaged by it.  A life of commitment to causes that are generally defined as worthy — like feeding and clothing the poor or ministering to the ill — but that do not move the person participating in them will lack meaningfulness in this sense. However, for a life to be meaningful, it must also be worthwhile. Engagement in a life of tiddlywinks does not rise to the level of a meaningful life, no matter how gripped one might be by the game.”

This is what underlies the difference between the happiest jobs and the most hated jobs. One set of jobs feels worthwhile, while in the other jobs, people can’t see the point. The problems in the most hated jobs can’t be solved by job redesign or clearer career paths. Instead the organizations must undertake fundamental change to manage themselves in a radically different way with a focus on delighting the customer through continuous innovation and all the consequent changes that are needed to accomplish that. The result of doing this in firms like Amazon, Apple and Salesforce.com is happy customers, soaring profits and workers who can see meaning in their work.

This description is a generalisation. If it rings true, you've found your career type. 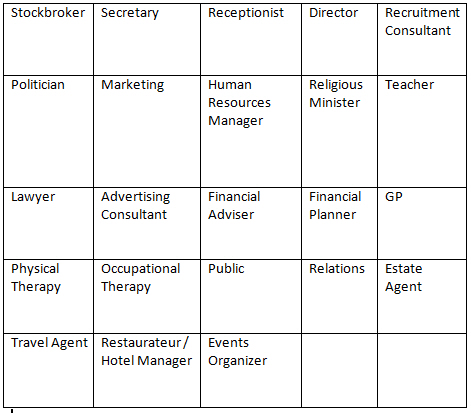 You are a great leader.

You genuinely enjoy being around other people. Your relationships with others are very important to you. You love talking and meeting new people.

You are very enthusiastic about work and about all that you do and have in your life. You love being the focus of attention. You enjoy a fast pace. You are very socially oriented. Therefore, you are much happier being with others than you are alone.

You crave interaction with others. You are very spontaneous and often act before you think. You are always quick to answer when you are asked a question, even if you aren't sure of the answer. It is easier for you to improvise as you go along.

You enjoy thinking out loud, and are most creative when brainstorming with friends or colleagues.

You enjoy being involved in many activities.  You are very easy to read, and often wear your heart on your sleeve. You are never afraid to tell people what you think. You are very empathetic and genuine. You can sometimes be seen as over-emotional or too involved by others. But that is only because you tend to get so involved in the things you do that they become personal.

You want to be adored, loved and appreciated. You like to please others and to make sure people are happy.  You trust your gut instincts.

You are easily inspired and trust that inspiration. You are very innovative. You analyse things by looking at the big picture.

You are concerned about how what you do affects others. You worry about your actions and the future. You tend to use a lot of metaphors and are very descriptive and colourful in your choice of language.

You are very creative, and get bored easily if you don't get to express yourself. You like to learn new things. You don't like the same old routine. You like to leave your options open. "

Start a Free Blog at Webs.com